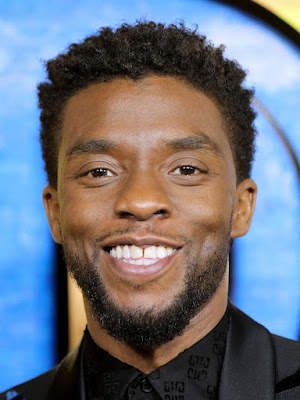 Prayers and condolences out to the friends and family of Chadwick Bozeman, a fine actor who passed away at age 43 today from colon cancer. Most famous for portraying Marvel's Black Panther in one of their best movies, he had much fine work ahead of him. An outstanding talent who will be missed.
Posted by Jerry Smith at 10:38 PM No comments: 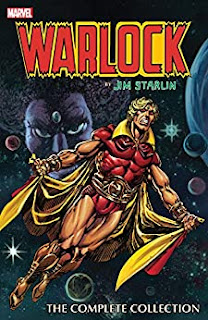 I was just a kid in the ‘70s, but I remember them as trippy times for comics. No creator was trippier than Jim Starlin, and no characters were trippier than the ones he worked on. While the beginnings of Adam Warlock were with Lee & Kirby (created as the character Him in Fantastic Four), Starlin and other writers morphed and grew Warlock into the space spanning, cosmic demi-god he became.

Warlock by Jim Starlin: The Complete Collection includes Strange Tales #178-181, Warlock #9-15, Avengers Annual #7, and Marvel Two-In-One Annual #2. While Starlin would return to the character frequently in subsequent decades, this book collects a brilliant contained story, with a beginning, middle and end. There are some side trips, but they all add up to an extremely satisfying, and surprising, conclusion. Starlin introduces some classic characters in these stories, including Pip the Troll, Gamora daughter of Thanos, and Drax the Destroyer.

In the first half of the book, the antagonist is the Magus, a future version of Warlock (with the trippiest afro you’ve ever seen). The Magus runs the Universal Church of Truth, an evil mind control organization. Starlin must have had a negative experience with religion as a child, as evil churches and clergymen are themes he revisits repeatedly in his work. For the second half of the book, Thanos was front and center as the villain who wants to destroy half the universe to please his mistress, Death. I didn’t understand that as a kid and I still don’t, but it is rather horrifying, then and now. 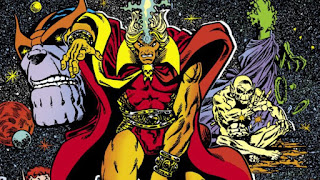 In these stories, Warlock’s journey concludes in one of the coolest rock-n-roll endings ever, crossing over between Avengers Annual #7 and Marvel Two-In-One Annual #2. When I read these books as a child I hadn’t read the Warlock stories that led up to them (nor would I have fully understood them) and they still blew my mind. It would have been fine if Marvel had left Adam Warlock where he was at the end of this epic, but I understand that Starlin made him a popular character through these tales and there was more of his saga to tell. In the meantime, while definitely products of their time, these stories still hold up and provide a thinking man’s version of a cosmic superhero. It was great fun to revisit them and they are highly recommended.

Grade: A
Worth your valuable time: Unequivocally.
Posted by Jerry Smith at 11:18 PM 1 comment: 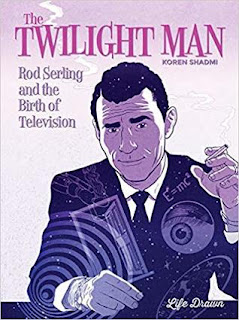 I never knew much about the background of Twilight Zone creator and host Rod Serling—except he worked briefly at local Cincinnati radio station WLW in the 50s, writing commercials and radio dramas. I heard other things about him—he wrote the first draft of the Planet of the Apes screenplay, he was prolific, and he sold the syndication rights to The Twilight Zone much too cheaply, never dreaming it would be broadcast worldwide in perpetuity. The Twilight Man, an expertly researched graphic novel/biography by writer/artist Koren Shadmi, changes all that. Shadmi, a comic creator from Israel, digs deep into Serling’s WWII experiences (where he was one of the few Jews in his platoon), his boxing experience—he was small and looked for ways to be tough—and his first attempts at writing and storytelling.

After the war, Serling dealt with his diagnosis of shellshock by writing stories and poetry. He found he had both a talent and knack for writing. As a former paratrooper, at first he supplemented his income by being a parachute tester, a dangerous—but lucrative—way to make a few extra bucks (then left him with several new injuries). After a few years toiling away at WLW in Cincinnati, Serling struck it big with his first live national presentation for Kraft Theater, a show called Patterns. His career took off from there. Multiple offers and a move to New York soon followed.

Throughout his career, Serling had to fight the TV censors and the balance between art and commerce. After years of this battle, he was inspired to create The Twilight Zone, where he could write about almost any TV taboo subject he wanted, as long as he cloaked it in a fantasy/sci-fi metaphor. Then things really took off. Twilight Zone did well enough for a five year run, but was never a runaway ratings hit. With his reputation now established, Serling wrote everything from live TV theater to books and endless Twilight Zone episodes. Not to mention being the on-air host of the show and the producer. Life was busy and hard on his marriage. After Twilight Zone, he taught screenwriting at Ithaca College and loved it, then smoked himself to an early death.


Artist/author Shadmi expertly handles the pacing of the story and Serling’s mental state during each phase. He shows the writer warts and all, and how intensely creative people give so much of themselves because they want to take advantage of work and popularity that may be gone at any time. This usually ends in burnout, as it did with Serling several times. However, Rod always bounced back and had something new to say. He didn’t always make the right decisions, but who does? Serling’s life ended too early during open-heart surgery after a major heart attack. Hollywood had permanently burned out one of the finest writers it ever produced at only 50 years of age. The Twilight Man not only deals with the popular parts of Serling’s career, but also the beginnings of live television and the battles artists have to fight to defend their voice and non-traditional points of view. For lovers of history and the mass media.

Grade: A
Worth your valuable time: Yes, a fantastic read.
Posted by Jerry Smith at 6:02 PM No comments:

Movies – The Man Who Killed Hitler and then The Bigfoot 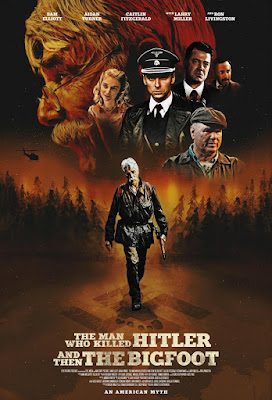 This is a strange one, and won’t be to everyone’s taste. I enjoyed it.

Ace actor Sam Elliott plays a weathered and grizzled old man, living a quiet and lonely life in his suburban home. He’s also the man who, near the end of World War II, killed Hitler in an Allied plot quickly covered up by the Germans. I’d add a spoiler warning, but, hey, it’s right there in the title! Through the years, Elliott’s character, Calvin Barr, has become disillusioned with life. The war led to a dim view of human nature, killing other humans, and cost him his best girl. Now he lives a settled and decent life, treating others kindly and not reliving his “glory” days.

Until the government comes to him and tries to recruit him to kill the Bigfoot. There are legitimate reasons why, as well as why Calvin is the best and only man for the job. Initially declining, after a talk with the younger brother who idolizes him (beautifully played by comedian Larry Miller), Calvin decides to strap on the rifle once again and go hunting.

Elliott does such a wonderful job portraying a man who is tired of killing, tired of taking the world’s problems on his shoulders. But as an honorable and practical man, he knows he must do what’s right. So he does it, efficiently and without question.

This quirky gem has a tone which varies from humor to soap opera drama, with a hightened sense of spectacle added for good measure. It’s silly and absurd while also being dramatic and moving. The film is cast perfectly, from Elliott himself to Aidan Turner (Poldark) as young Calvin and Caitlin FitzGerald (Masters of Sex) as the girl-next-door teacher who is the love of his life. Like any man, Calvin’s life holds great achievements—certainly more than most men—and great disappointments. It’s how he handles these events that show what kind of man he truly is. And that man is both honorable and worth watching.

Worth your valuable time: Yes.
Posted by Jerry Smith at 5:04 PM No comments: 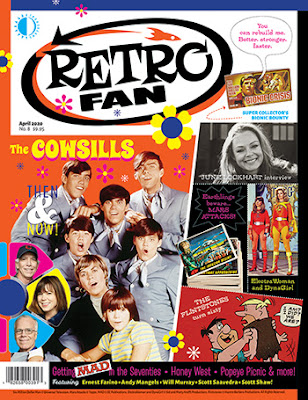 More stuff to read during the apocalypse! Retro Fan is a slick, color magazine that deals with pop culture of the 60s and 70s. It’s not only a great mag with articles about everything from ViewMaster, classic toys and The Flintsones to food and tourist attractions, but this month features my “Celebrity Crush” column! My subjects? Only the best—Jeannie the Genie vs. Samantha Stevens. Yes, I look at my ongoing crushes on two fine ladies, Barbara Eden and Elizabeth Montgomery. I actually planned to meet Ms. Eden last week at the Lexington Comic & Toy Show, if it hadn‘t been cancelled. Curse you, Coronavirus! Anyway, the mag is a great read. Pick it up if you’d like to see whom I picked as the ultimate Celebrity Crush. Order your copy online here.
Posted by Jerry Smith at 4:46 PM No comments: 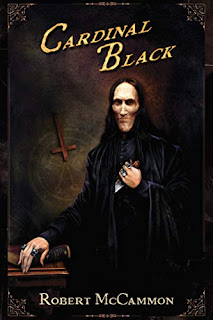 Cardinal Black is McCammon’s latest entry in his early American colonies thriller series featuring Matthew Corbett. Corbett is sometimes referred to as a young James Bond, but I’m not sure why. He’s not a spy (although he certainly does some spying), is much more of a thinker than a fighter, and while attractive to women (especially the femme fatal type), he’s not really a ladies’ man. I suppose that’s just an easy way for reviewers to put him in a box for easy consumption.

In the series, Matthew is a good man in a world of brigands. Ostensibly working as a detective for the Herald Agency, he is based in early 1700s New York, a colorful and immersive world brought to life by master raconteur Robert McCammon. The book is the best entry in the series since the first, Speaks the Nightbird (one of my favorite books of all time). The story is a thrill a minute, with high stakes, major battles with villains, narrow escapes and twisty alliances that change every few pages.

Cardinal Black is continued from the last volume, Freedom of the Mask. Matthew has promised to regain a book of evil potions for the crime boss Professor Fell. He is assigned a chaperone to keep him in line, a charming psychopath named Julian Devane. Starting out as bitter enemies, the two come to, if not an understanding, at least a mutual respect. Why would Matthew agree to such a thing? Berry Grigsby, the love of Matthew’s life, is a drugged prisoner of Professor Fell, and will stay in a permanent brainwashed and drugged state unless Matthew can recover the book—which contains the antidote to Berry’s ills.

The mission takes Matthew and Julian to the heart of the English countryside and some very bad men. And women. The villains, a rogue British Admiral and Satan’s helper, the aptly named Cardinal Black, are auctioning off the potion book to the highest bidder, buyers that include killers from the worst criminal groups in the world. Any of whom would kill Matthew in a second. And believe me, they try.

I couldn’t put this book down; McCammon is a master of suspense and cliffhanging chapter endings. Will Matthew get the book and save Berry? Will Professor Fell kill him when his task is accomplished? How will they escape? And who will change the other the most, Matthew or Julian? Cardinal Black is a brilliant thriller and a true treat. So go treat yourself.

Worth your valuable time: Yes!
Posted by Jerry Smith at 4:01 PM No comments: 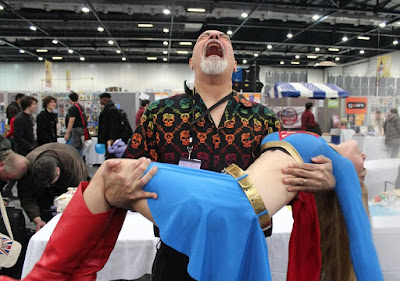 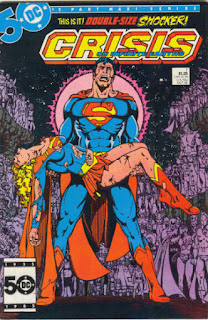 I just reread the Crisis series, and it holds up just fine, thank you.
Posted by Jerry Smith at 10:51 PM No comments: